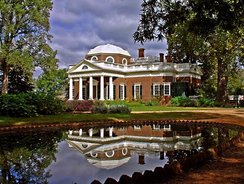 The city of Charlottesville was established before the Revolutionary War and was home to two Presidents, Thomas Jefferson and James Monroe. Major attractions include Monticello and the University of Virginia. Thousands of visitors travel to the Charlottesville area every year for wine and beer tours, hot air ballooning, hiking, and world class entertainment at the John Paul Jones Arena. The city is well known for its support of the Arts and hosts the Virginia Film Festival and the Virginia Festival of the Books. The city itself has a population of 45,000 and is the county seat of Albemarle with a total population of 150,000.