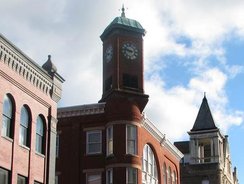 Founded in 1747, Staunton, VA now covers 19.7 square miles and has a population of approximately 24,350. Our city is a wealth of culture and history. It served as an important manufacturing and transportation center during the Civil War, in 1902 she became an independent city and is the first one in the world to adopt a city manager form of government. Staunton was the home of Staunton Military Academy and Augusta Female Seminary (now Mary Baldwin College). It is the birthplace of President Woodrow Wilson and home to the Frontier Culture Museum, and the American Shakespeare Center, an exact replica of Shakespeare’s own Blackfriars Theatre.

With its historic architecture, unique shops, arts and entertainment, and variety of dining experiences, Staunton, VA is a place you’ll want to visit and stay.