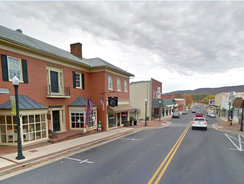 The history of Waynesboro began with westward expansion during and after the Revolutionary War. Travel by wagon to the areas west of the Appalachian and Blue Ridge Mountains, known as the frontier, was possible only through natural gaps between the ranges. One such gap was called Rockfish Gap, located near the current city of Waynesboro. The area became a convenient rest stop for travelers. As the gateway to the Skyline Drive and Blue Ridge Parkway, and its proximity to the Appalachian Trail, Waynesboro remains a popular tourist stop.

The city began with a population of 250 in 1810 and through growth and annexation, has grown to over 21,000. It has been the home of manufacturers such as Dupont and Wayne-Tex, and is currently the corporate headquarters of Ntelos. The city is also notable for being the home of the well-known artist P. Buckley Moss. Waynesboro is currently undergoing exciting revitalization of the downtown area with a focus on supporting the entrepreneur and attracting tourists to its unique dining and shopping opportunities.